The House of the Old Man

Many years ago I read about an ancient shrine to the goddess hidden away in a remote highland glen. It was written about in Twilight of the Celtic Gods [1]:

“This rocky shrine is in all probability connected with the pagan Celtic cult of the Mother Goddess. It may be the only surviving example of its kind in the whole of the British Isles. But this is no lifeless pile of stones, for the shrine is part of a living Celtic tradition which has been continued into recent years by a guardian – a lone shepherd – who has performed a vital ritual at the little shrine, as his father and grandfather had done before him. At the door of the little stone house, from May to October, sit three strange stones, keeping watch over the glen. The tallest, 46 centimetres (18 inches) in height, is known as the Cailleach, Old Woman or Hag. Her partner is the Bodach or Old Man, and there is a third, the smaller Nighean, or daughter.”

The shine is known as Tigh na Cailliche, ‘The Hag’s House’ or the house of the goddess, or alternatively – on the map – as Tigh nam Bodach, the old man’s house. Earlier this year a friend and I were inspired by a post from William A. Young’s blog Feral Words to make a pilgrimage to the house, and this is the story of that visit.

Tigh nam Bodach with the strange stones sitting outside

William had visited the shrine during the winter, when snow was on the ground. He and his companion took a challenging route up to the glen from Bridge of Orchy, camping out overnight. When he arrived he found that the stones representing the old woman and her family were snugly tucked away inside the little house, for that is the ritual of the place: every year at Samhain the family of stones is moved inside the house for the winter months, and then at Beltane they are taken out again, to sit in front of the little stone house.

I’m not too good at long walks, so I looked for an easier path to the shrine, and found one mentioned here, accessible by car and then by foot along the shore of Loch Lyon. I was also hoping that going in mid-summer would make things easier. It did, but the journey still took me near to the limits of my strength!

On this kind of magical trip, signs and omens become important. Everything seen and done becomes part of an unspoken dialogue with the shining ones. The afternoon before our walk we stayed near Loch Tay, and went for a stroll in the warm summer sunshine, looking for some cup-marked rocks that were shown on the map. As we wandered around a field, an white-bearded sheep farmer came by on a quad bike, his collie sitting on the back. I asked him about the cup-marked rocks, but he wasn’t sure where they might be. We talked more. He spoke quietly and thought a long time about each thing he said. I felt myself slow down. It was like he was full of the countryside and the light. “I was born in the Western Isles,” he said, “but my wife is from here.” Somehow this encounter stayed with me, and cheered me on our walk. I felt I had been checked out by ‘the old man’.

During the night the fine weather broke and we were woken by thunder and lightning. In the morning it was still raining, but we had waterproofs and after some hesitation we decided it was now or never. Driving over the mountain pass from Loch Tay into Glen Lyon, we were surrounded by mist and low clouds as the rain fell, with lightning flickering above us. After splashing twenty miles along single-track roads, we finally arrived at the start of our walk by the hydroelectric dam at the east end of Loch Lyon.

As we began to walk the weather relented, and although the clouds continued to lour over the hills, the weather remained dry as we walked by the dam and followed the track alongside Loch Lyon. 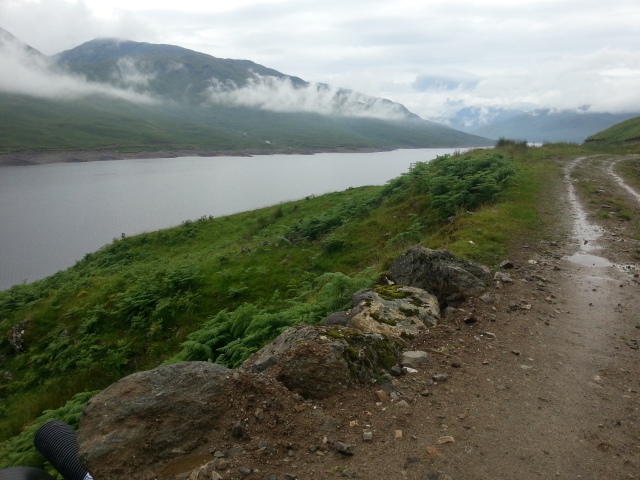 During the walk we were reminded that nothing worthwhile is achieved without difficulty. In so many stories the heroes and heroines must perform tasks and overcome obstacles in order to reach their goal. It felt like the morning’s rain had been an obstacle like this, and we encountered others. For example, the map optimistically described the crossing of Allt Meurain as a ‘ford’, but it turned out to be quite deep. We ended up wading knee-deep through rapidly flowing water. The pain of walking barefoot on the sometimes sharp stones in the rocky riverbed had to be endured, for the body’s natural reaction of aversion risked falling headlong into the icy water.

Luckily we did not see the Washer at the Ford, which I took as a good sign!

After the ‘ford’ we began walking up Glen Cailliche, the valley of the Cailleach, and just when I was beginning to despair of finding it, we came in sight of the Tigh nam Bodach, down below the track on the northern side of the river. There were more than just three stones sitting outside – all with the same characteristic rounded river-worn shape. As you can see in the picture below there was one big one with a clearly defined head. Behind it was a dumpy, almost acorn-shaped stone. To the left were two smaller stones with defined heads, lying on their sides. To the front there were three other quite small stones which seemed part of the pattern. In Twilight of the Celtic Gods [1] it says that there is a local legend that every hundred years or so, the Cailleach gives birth to another stone, and “though the baby of the family is still very small, people swear it is growing and will one day be just as big as the others”.

Anne Ross, in her Folklore of the Scottish Highlands [2], retells fragments of the cult legend surrounding the house which have survived orally:

“Many years ago, in a fierce snowstorm, an unnaturally large man and woman were seen coming down the mountain-side of the upper glen. They asked the people who were still settled there, for hospitality and shelter. These were willingly given to them. This pleased the supernatural pair well and they took up residence in the glen when the inhabitants had built a thatched house large enough to accommodate them. The woman was pregnant and in due course gave birth to a daughter. The weather was always favourable when they dwelt there. The stock flourished and the crops were always of the best.

Then one day the time came when they decided they must go. Before doing so, they promised that as long as they were remembered and their house kept in order, and everything done as they themselves had done it, they would bring it about that winters would be mild, the summers warm, and peace and prosperity would always be with the people who had been so generous to them.  In memory of this event of long ago a small shrine in the form of the house was constructed and every May Day the three stones representing three deities would be taken out of the house and placed facing down the glen, there they remained until the house was re-thatched and made warm and comfortable for the winter and they were returned to the miniature house on the eve of 1 November, Hallowe’en. When the upper glen was flooded and the people moved away, it became the shepherd’s duty to continue this ritual and this was faithfully carried out.”

Looking over the shrine up Glen Cailliche

The feeling of the shrine seemed to me very pleasant and warm. I had half expected a rather more fierce encounter with the Cailleach, but if I had to put my feelings into words, I would say that I found her a mother, one who can comfort and provide strength in need. I suspect though that she needs to be approached properly. After a while resting at the shrine, the mist began to descend down the Glen and we began our walk back to the dam.

May she be with you in your hour of need

5 Responses to The House of the Old Man