Part 1: Geometrical Models in the Sepher Yetzirah and Bahir

In the introduction to their translations of the Sepher Yetzirah and Sepher ha-Bahir[1],  W.G. Davies and G. Zur suggest that the structure of the Sephirot described is consistent with that of a cube containing a double tetrahedron and octahedron. The aim of this note is to try and clarify this geometry.

We start with a cube, shown in red. By joining alternate corners of the cube, we make a tetrahedron (a triangular pyramid), coloured green and labelled 1,2,3,4:

We make a second tetrahedron, joining the other four corners of the cube (shown below in black). This makes two intersecting tetrahedra as illustrated below.

The edges of the two tetrahedra cross at the middle of each face of the cube, giving six points. Joining these points together makes an octahedron, shown in blue and labelled 5,6,7,8,9,10: 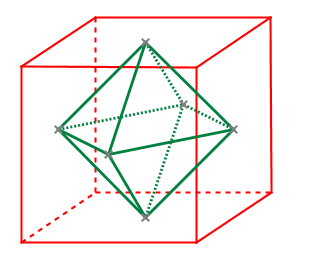 The figure below shows the same structure, viewed from a different direction lining up with point 4. Considering Verse 8 of Chapter 1 in Sepher Yetzirah, we interpret the four corners of the green tetrahedron as representing: 1-Spirit, 2-Spirit (or Air) from Spirit, 3-Water from Spirit, and 4-Fire from Water. The corners of the octahedron are interpreted as aligning with the six directions (Height, Depth, East, West, South, North).[2] Thus these points are the 10 Sephirot.

In Chapter 5, Verse 2 of the Sepher Yetzirah, the twelve simple letters are linked to the 12 diagonal directions: East-Depth, South-Height, South-East and so on. These correspond to the edges of the octahedron. Each corner of the octahedron corresponds to one of six directions, and so the lines joining them correspond to the 12 diagonal directions (as illustrated below, showing the signs of the zodiac corresponding to each of the 12 simple letters).

End of Part 1.
A PDF version of Part 1 and Part 2 is available here.

[3] In the introduction to Sepher Ha-Bahir, where this diagram originates, the three visible corners are labelled Good, Height and Depth. I suspect that Height and Depth were labelled in error and should have been Beginning and End.

druid, mathematician, blogger, gardener...
View all posts by singinghead →
This entry was posted in Kabbalah, Sacred Geometry. Bookmark the permalink.