The Octave and the Tree of Life

This post is part of a series about the octave as a way of understanding the world.
The previous post was about Gurdjieff’s Law of Seven.

The central image of the modern Kabbalah is the Tree of Life – an image of the relationship between the divine and the material worlds, mediated by ten sefirot.

In his 1972 book Tree of Life, Z’ev ben Shimon Halevi wrote about the Octave and the Tree of Life. The Octave, or the Law of Seven, is shown descending down the tree from Keter to Malkhut following the  traditional lightning flash path which zig-zags down the tree. This brings in some new ways of understanding both the octave and the tree.

Tree of Life and the Octave

Structure of the Tree

The Tree of Life is formed of ten sefirot, ‘spheres’ or ‘lights’. They are arranged in three columns or pillars – to the one side is the pillar of light or mercy or active force, and on the other side is its opposite – the pillar of darkness, severity, passive form. The central pillar, sometimes called the pillar of consciousness, reconciles these extremes.

The sefirot are also arranged in levels. The simplest way to think of this is that the divine or heavenly world is at the top, centred on the sefira Keter, and the material world is at the bottom, centred on the sefira Malkhut. There are many ways to work with this, but one way is to think about the creation of the world proceeding down the path of the lightning flash at the moment that God said ‘let there be light’:

From Kether (the Crown) the lightning flash goes to Hokhmah (wisdom) then Binah (understanding), then it crosses the abyss – within which lies Daat (knowledge).

Stepping down from the upper world, the lightning flash passes on to Hesed (loving kindness), Gevurah (strength) and then Tiferet (beauty), the heart of the tree.

The lower triad is formed of Nezah (victory), Hod (splendour) and Yesod (foundation), leading to Malkhut (the kingdom).

The Octave on the Tree

The octave follows the lightning flash, descending from do at Kether to do at Malkhut. As you can see in the diagram, the mi-fa interval lies over the abyss (and Daat), and the final ti-do interval lies within the sephira Yesod. The central sephira Tiferet is in the place of the Gurdjieffian Harnel Aoot, the interval which in Gurdjieff’s scheme was ‘disharmonised’ by the effects of the other two intervals. Halevi calls this “the thing itself”

This arrangement of the octave has the effect of relating the notes and intervals in the octave to different elements of the tree: the notes re, fa and la are on the active pillar, set against the notes mi, sol and si which are on the passive pillar. The do notes, the two intervals and the Harnel Aoot all lie on the central pillar of equilibrium or consciousness.

This arrangement of the octave on the tree works well with the idea of the extended tree, which is a way of understanding the tree of life operating in four worlds from the divine to the material.

The extended tree (also called Jacob’s ladder) is an interlocking form of the Tree of Life where trees in the four worlds are shown as overlapping, so that for example the tree in the world of formation, Yetzirah, has its base in the sefira Tiferet in the material world of Assiah. The extended tree was first publicly presented in Z’ev ben Shimon Halevi’s books published in the early 1970s.

How the tree in each of the four worlds overlap to make the extended tree.

From the point of view of the octave, the extended tree is a series of interlocking octaves, where for example the mi-fa interval of one octave coincides with the si-do interval of the one above.

The octave has been related to the planets and the music of the spheres since the Pythagorean Octave. This relationship is also mirrored in the correspondences of the sefirot:

In this scheme we see the planets arranged in effect by their apparent speed from the earth, fitting with the idea of the planets moving on a set of nested celestial crystal spheres about the earth, making music as they go. 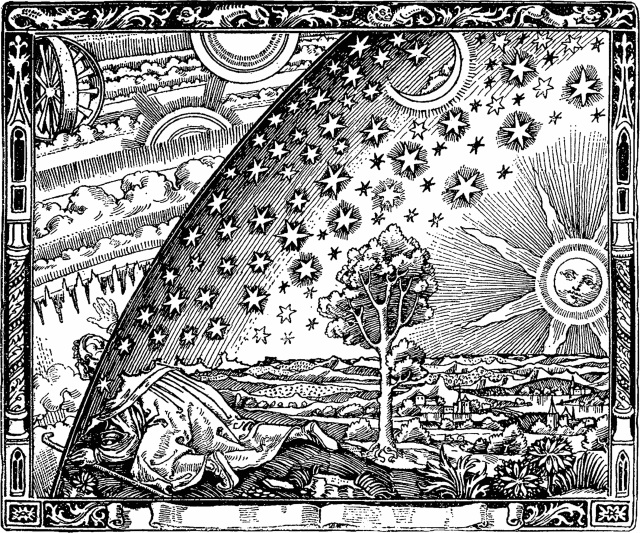 The edge of the firmament: wood engraving from an 1888 book by Flammarion.

druid, mathematician, blogger, gardener...
View all posts by singinghead →
This entry was posted in Octave. Bookmark the permalink.