The Cailleach at Sligo

This summer I visited Sligo on the Northwest coast of Ireland, looking for traces of the Cailleach, the crone of Irish legend. What I found there was a prehistoric ritual landscape of breathtaking scale, and finally an intimation of the Cailleach herself. At the centre of the landscape is Carrowmore, a collection of 30 neolithic passage tombs. To the northwest the great hill of Knocknarea dominates the landscape.

From the top of Knocknarea a huge prehistoric cairn, the tomb of Queen Mebd, looks down on the monuments of Carrowmore. 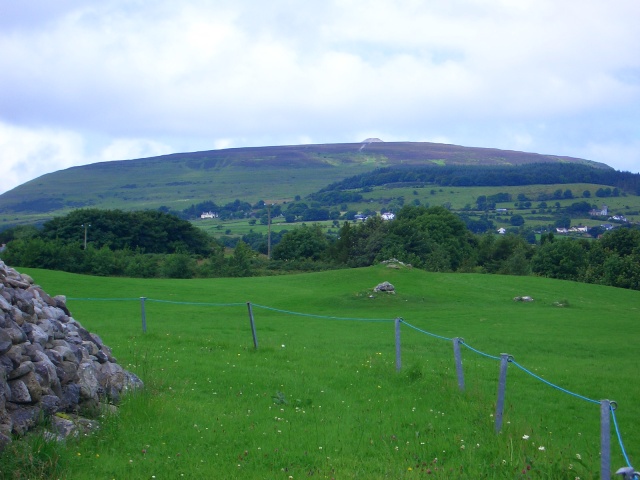 In the opposite direction lie the Ballygawley mountains. The soft curves of these hills suggest to some people the shape of a giant woman lying down. In legend, the hills are associated with the Cailleach Bhérra – the old woman of Beare.

The Ballygawley mountains from the centre of Carrowmore

The Cailleach is an important figure in Irish and Scottish folklore. As the old woman, the veiled one, or the hag, she is associated with many landscape features and prehistoric sites. In folklore she is of great age, remembering previous generations and landscape changes on a geological timescale. For example in one story, she remembers when the ocean was a forest, full of trees. [1]

As well as great age, she also has giant stature and supernatural strength. Although she is old, she renews her youth every generation by bathing in a deep pool before sunrise on beltane. [1]

She is also a shaper of the landscape, and there is a story of her throwing large rocks around in a contest with another cailleach. The contest takes place at dawn, while the people of the place are all still asleep. The story explains the landscape: anyone who comes to that district today can still see a pile of large rocks on the hilltop, with no other rocks anywhere near them.

Gearóid Ó Crualaoich suggests that this story is “a metaphor for the terrifying cosmic energies that have gone into the rendering of the physical landscape of human times into its shape and form, energies beyond the tolerance of humans who live their lives in a smaller and, hopefully, safer compass. The physical features of the landscape today, however, and legends about its formation, remind the human community of the otherworld dimension of their environment, a dimension available to them in the legends and other imaginatively creative narrations of cultural tradition.” [2]

As mentioned above, the Ballygawley mountains southeast of Carrowmore are associated in legend with the Cailleach. One of the peaks is named after the Cailleach Bhérra and there is a passage tomb there called the Cailleach’s house. When viewed from the centre of Carrowmore, an interesting alignment comes into focus.

At the centre of Carrowmore is a large passage tomb called Listoghil. Originally the monument would have appeared as a large cairn or mound of stones. There would have been a passage giving access to the centre of the cairn, where six large upright stones supported a massive roof-slab.  The monument has now been partially restored, so that the central chamber can be seen surrounded by walls of cairn-stones held back by wire fencing. In effect a visitor walks into a cut-away version of the original cairn to find the central chamber. 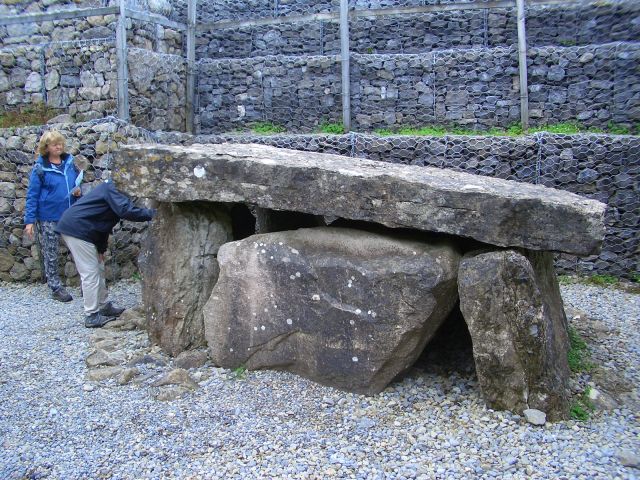 The central monument of Listoghil, with the partially restored cairn in the background (originally the monument would have been completely covered by stones with just a passage leading in from the left).

Researchers at Listoghil have recently discovered a fascinating seasonal alignment. The passage into the centre of the cairn, now represented by the entry path to the monument, is directed towards a distant point called the saddle on the Ballygawley mountains. 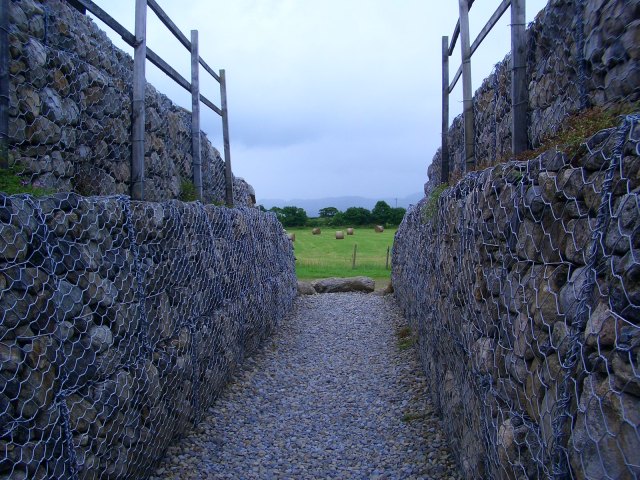 Looking out from the centre of Listoghil along the passage towards the saddle on the Ballygawley mountains.

At the autumn equinox, the sun rises exactly in the east, but then each morning the sun rises a little bit more towards the south, until it reaches the most southerly sunrise on the mid-winter solstice. It then begins to swing back towards the east. From the centre of Listoghil, this movement of the sunrise takes place over the Ballygawley mountains, and the sun rises over the saddle around Samhain, so that the rising sun shines in to the centre of Listoghil. By mid-Winter the sunrise has moved along the mountains to the Cailleach’s House, before turning around for the journey back. By winter’s end, as the sunrise comes back towards the east, the light once again shines into Listoghil around Imbolc.

Ballygawley mountains showing the progression of the winter sunrise

In his book Listoghil: A Seasonal Alignment? [3]  Pádraig Meehan describes a moment when he saw the Samhain sunrise:

31 October 2008 was a beautiful crisp morning, one of the year’s first frosts. In the moments before sunrise the Ballygawley Mountains appeared to burn, and fingers of sunlight threaded the sky. The four peaks of the Ballygawley Mountains huddled on the horizon, the passage tombs at each of their summits clearly discernible; Aghamore Far to the north, Sliabh Dhá Éan, Sliabh Dargan and Cailleach a Bhérra. As the light intensified before sunrise the sense of expectation increased. Suddenly, a brilliant sliver of sun-disk appeared, close and immediate. The land darkened under the fire. On October 31, the sun rose just off-centre left in the saddle and shone directly down the ‘passage’ of Listoghil, and through the chamber. Queen Meadbh’s cairn on Knocknarea was illuminated by sunlight approximately one minute before the sun reached the central tomb in Carrowmore.

Meehan relates that there is a local story describing the form of the rounded hillocks of the Ballygawley mountains as the hag lying on her back, so that the sunrise travels up her belly and breasts to rest at her head at midwinter. Seen from the slopes of Knocknarea, the hills look to me more like a figure lying on her side with her legs drawn up.

Ballygawley mountains from Knocknarea. If the figure is lying on its side, then the hills from left to right would be hips, elbows, shoulder and head.

Interestingly, the poet and esotericist W B Yeats seemed to be aware of this polarity. In the opening of his poem The Hosting of the Sidhe, he has the faerie host riding from Knocknarea and over the grave of Clooth-na-Bare (the name he used for the Cailleach a Bhérra).

In the central chamber of Listoghil, the passage is partially blocked by a stone with a blunted peak, which forms a triangular spear of shadow in the chamber when the sunrise shines down the passage. Pádraig Meehan describes lying on his back and watching the shadow cross the roof slab. He wondered “Did a ritual specialist once lie in this way to observe light and shadow in the chamber? Or was the entire event, or sequence of events, arranged not for the living, but for the dead?”

The blocking stone in the central chamber

The view from Knocknarea

The climb up to the summit of Knocknarea is steep, but worth the effort. On a clear day there are views of the sea on three sides, with the Ballygawley mountains in the south-east. Looking down the hill the monuments of Carrowmore seem tiny and insignificant.

The view from Knocknarea towards the north

The cairn at the top is huge, built from large stones.  It is the largest unopened cairn in Ireland and is thought to conceal a neolithic passage tomb dating back to 3,000 BC. Queen Medb of Connaught is supposed to be buried in the cairn, standing up with her spear and shield. According to Wikipedia, Mebd was originally a sovereignty goddess, whom a king would ritually marry as part of his inauguration. Her name, cognate with the English word ‘mead’, means ‘intoxicating one’. This perhaps then was the summer face of the goddess, with the Cailleach as her winter person.

Michael Quirke, a local woodcarver and folklorist introduces a third person to this local form of the goddess: Findabair as the maiden. In this video he also mentions another local name for the Cailleach: Garavogue which is the name of the river running through Sligo.

The Stones of the Cailleach

I just want to finish by talking a little bit about an impression I got of the Cailleach from this visit. The rocks that I saw both at Carrowmore and on the top of Knocknarea had an organic quality. For example, look at this boulder, part of one of the Carrowmore circles:

It’s made of gneiss – a rock formed under extreme temperature and pressure. Its shape flows, in curves and bands suggestive of half-formed living shapes. This is the same rock from which the ‘Cailleach’s body’ – the Ballygawley mountains – is formed.

Here is another rock, this time from the top of Knocknarea:

I think this is fossilised coral, and there are many fossil rocks like this in on Knocknarea, again suggesting an idea of half-formed living things in the rock. The third type of rock is more about touch than appearance. This is the type of rock sometimes found in caves, with a layer of small crystals one one side, somewhere between sandpaper and velvet to the touch. This type of rock was also on Mebd’s cairn on Knocknarea.

Letting this all percolate in the back of the mind brought about a picture of the Cailleach as a shaper of forms, working very deep, with the earth and with the living creatures of the earth. The shaper of the mammoth and the mountain. She whom the cave painters addressed.

[3] Listoghil: A Seasonal Alignment? by Pádraig Meehan is available at the Carrowmore visitor centre, but is seemingly out of stock on online retailers. Much of the same information from the book is available online at http://intarch.ac.uk/journal/issue32/meehan_toc.html

4 Responses to The Cailleach at Sligo