Here is a great clip from The Dancing Floor pilot film by my friend Lyn Webster Wilde. In it we see Sita and Gethin begin their journey on the spiral pattern of the dancing floor.

You can find out more about the film here: http://igg.me/at/Dancingfloor

The spiral patterns on the floor fascinate me, and I think part of this fascination is because they are based on sacred geometry.  I recently came across a very interesting article on the triple spiral pattern that appears in the dancing floor (and is of course a very important element of Celtic design). The article, An Tríbhís Mhòr – On The Triskelion in Iron Age Celtic Culture, is written by Brendan Mac Gonagle, a Celtic archaeologist working in Eastern Europe.

In the article, Mac Gonagle says that the geometry of the triskele (triple spiral) is a perfect example of the Golden Ratio. This ratio is often used in architecture to produce a harmonious effect, and according to Mac Gonagle it was central to the mathematical and religious movement led by Pythagoras, with which the Celts were familiar. He goes on to say:

“In fact, from a geometric perspective the basic construction of the triskele derives from a regular hexagram, a form which plays an important role in the compositional structure of Celtic images during the Iron Age, and which had a particularly important religious significance for them. The hexagram itself is composed of two equilateral triangles, representing harmony between male and female elements.” He then gives this image, which I will be studying over the next few days! 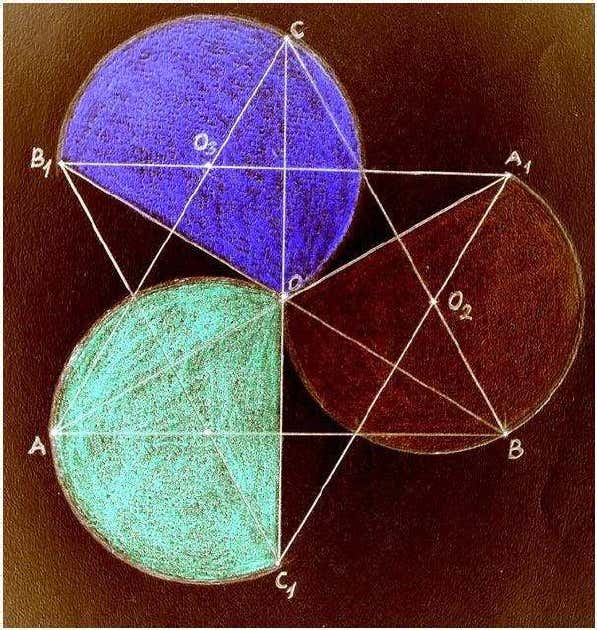 Mac Gonagle also gives some interesting quotes on the relationships between the Celts and classical Greek civilisation:

“And it is well known that Plato is found perpetually celebrating the barbarians, remembering that both himself and Pythagoras learned the most and the noblest of their dogmas among the barbarians”.

“And the Celtic Druids investigated to the very highest point the Pythagorean philosophy, after Zamolxis, by birth a Thracian, a servant of Pythagoras, became to them the originator of this discipline. Now after the death of Pythagoras, Zamolxis, repairing thither, became to them the originator of this philosophy. The Celts esteem these as prophets and seers, on account of their foretelling to them certain (events), from calculations and numbers by the Pythagorean art”.

6 Responses to The Dancing Floor Spirals