Caer Brân is an Iron Age hillfort built on a Bronze Age site near Land’s end in Cornwall. Located on a hill in the centre of the Penwith peninsula, it has good views of the countryside and the sea surrounding it. This wonderful kite picture by Hamish Fenton shows what the site looks like from above. 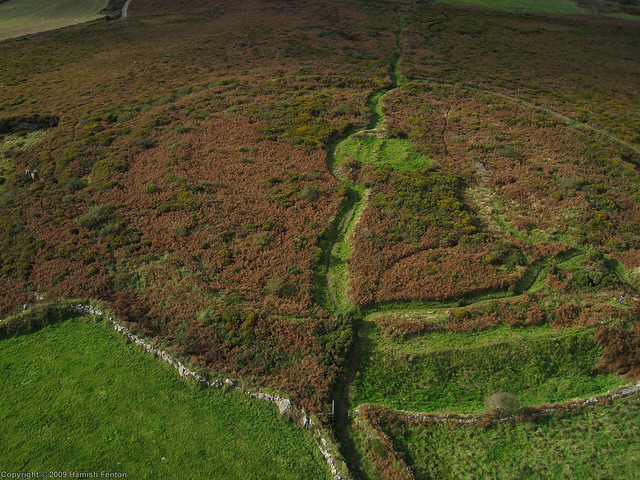 My interest in Caer Brân came about because of the name and its potential connection to Bendigeidfran (Brân the blessed) the giant king of Britain who is the main character in the second Branch of the Mabinogion. Brân seems to be a common enough Celtic name, meaning Raven or Crow, but it is tempting to entertain the possibility of a more specific connection, as some scholars have done in the past.

Many years ago, I went to visit Caer Brân, with this connection in mind. The surrounding area is full of ancient sites – fogous and holy wells under the ground, and megaliths above, with plenty of tales of the little people and mermaids to add some spice. The walk up to Caer Brân was a bit of an adventure. The hillside was very overgrown with gorse, heather and bracken, and there were warning signs about falling into old mines (much of the area has been quarried and mined for tin). But once I got to the centre, the space was clear and open, surrounded by a circular ridge and an outer ditch which looks like it gets waterlogged in the winter. From east to south to west the horizon is the sea.

Purpose of the Hill Fort

The Hillforts Study Group Field Guide (see below) explains that the site was developed in two major phases: an earlier Bronze Age hilltop enclosure containing at least three ring cairns was succeeded by, and respected by, a large enclosure of later Iron Age date:

“Re-use by Later Iron Age people of a hill-top with earlier ritual remains and thus perhaps folk memory associations with ancestors, spirits etc may itself be significant. Hillforts, and cliff castles, appear to have served several important functions of which defence need not have been the most important. They were presumably built at the behest of the higher levels in society, and represent places at which people probably gathered regularly. Communal ceremony and ritual are likely to have been key defining activities… Caer Brân may therefore represent the culmination of perhaps two thousand years of ritual tradition which required the construction of a massive, prestigious, visibly impressive monument focused around a long-revered hilltop site.”

A Connection with Brân the Blessed?

On the association with Brân the Blessed, Helaine Newstead includes a note in Bran the Blessed in Arthurian Romance:

“Caer Brane owes its name to the nearby hamlet of Brane, which is a corruption of Boswran or Bos-uran. Bos-uran, owing to the confusion of u and v in medieval documents, may possibly be Bos-Vran: house of Bran. Caer Brane would then be the Castle near the House of Bran.” †

A few miles north of Caer Brân, near Mên-an-Tol, there is another link to the name bran – a standing stone called Men Scryfa. The stone is inscribed with a Latin inscription “RIALOBRANI CUNOVALI FILI,” translated as “Royal Bran, son of the Glorious Prince.” The standing stone itself is believed to date to the Bronze Age, but the inscription is much younger, dating to around 500AD.

According to legend, Rialobran was the son of a king, Cunoval, whose castle was overrun by a usurper, killing the king and orphaning the boy who was brought up in exile. When he grew up, Rialobran returned to challenge the usurper. A great battle took place and Rialobran died and was buried beneath the stone. The stone was supposed to be the same height as he was, which would make him a giant man.

Caer Bran at The Modern Antiquarian

Caer Bran at the Megalithic Portal

Men Scryfa at the Megalithic Portal

Men Scryfa at the Stones of England

druid, mathematician, blogger, gardener...
View all posts by singinghead →
This entry was posted in Archaeology, Welsh sources. Bookmark the permalink.